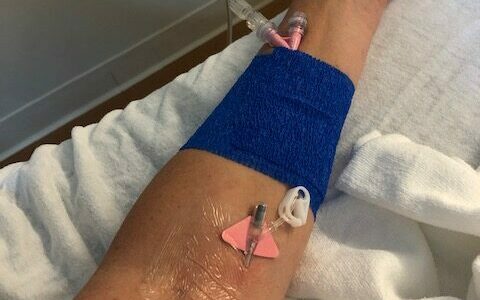 Mid May, I woke up in the middle of the night with a severe stomach ache. By morning I was in absolute agony. My husband dropped me off at the nearest hospital (Covid rules = no visitors allowed). This first day seemed to go by pretty swiftly, the doctors saw me right away and scheduled an abdominal CT scan. Since I had to drink contrast fluid and wait for it to work through my intestines, there was a couple hours of waiting involved. The doctors had started an IV with pain meds, so I was feeling pretty good at this point – except for the Covid nasal swab – the early version where they had to swipe the back of the sinuses was eye-watering awful. As I waiting and starting to feel better, I remember thinking this is probably going to amount to nothing and I’m wasting everyone’s time.

When the results came back the ER doctor visited and let me know I had an intestinal obstruction and that I’d need to have it surgically removed. Her slightly enlarged eyes and barely concealed pity gave me an uneasy feeling. This feeling compounded when my questions were not answered directly or specifically.

“What’s causing the Obstruction?”
“Could be any number of things…”
“What will the surgeon be doing exactly?”
“Depends on how he wants to handle the obstruction… He’ll be able to give you those details when he talks to you, let’s get you admitted”.

Hospital admission during a pandemic looks a bit different than any other hospital experience I’d had before. I had my own room. The doors were heavy, always closed and completely sound proof.

When I’d ring for a nurse, it would take anywhere from 1h to 3h for an actual person to visit my room.

When a nurse did appear, they often had difficulty managing their normal tasks due to ill fitting and excessive PPE gear. The staff fielding the ‘help desk’ calls never had any information. I was just sitting in a room, waiting.

On day two I was expecting more information but I really didn’t get much. I flipped between feeling incredibly uneasy, unsure of what was going on and utter boredom.

I hadn’t eaten anything since the night before I went to the ER and my stomach ache had completely disappeared. My body was back to feeling normal and it felt weird to be closed into a white, institutional room, far away from my husband, my kids and my mountain bike. I spent a lot of time on the phone talking to family and friends. When the attending doctor finally made a visit late in the day, he was shocked to find me knocking out pushups on the floor.

Various doctors came and went after his visit – a gastroenterologist, a pulmonologist. No one had much info for me. The obstruction could be a collection of debris like seeds, it could be a growth, it could be twisted intestines…

The obstruction was a tumor.

I can’t recall exactly when I saw the surgeon for the first time, but he was direct and clear.

The obstruction was a tumor, a large one – bigger than a baseball. I needed to stay in the hospital instead of waiting for my surgery appointment in the comfort of my home because the tumor could rupture – and that would be BAD.

Yes, this could be cancer, but that’s unlikely, and we won’t know anything for sure until the biopsy comes back. Yes, he does hundreds of these surgeries every year (removing a section of intestines and reconnecting), but not usually due to a tumor – those he only sees once a year. He’d be sewing the intestines up with titanium stitches that will forever be visible on future scans & x-rays.

It would have saved me a metric-ton of worry if any doctor had told me any portion of that information in the ER. But now I understood the ER doctors & nurses shocked look and undertones of pity.

A baseball? Jesus, how can that be?

Surgery was the next day.

My 9am appointment kept getting pushed back because the hospital was short staffed thanks to Covid. Eventually it was time. My anxiety peaked when the anesthesiologist asked if I had Crohn’s disease. Why would any medical professional ever make assumptions? “Uh, no. I have a tumor.”

I was wheeled into the operating room, staff bustled around. The anesthesia quickly drifted me into sleep.

When I came to, the surgeon told me there were a few surprises, but that overall everything went smoothly. The tumor was encapsulated (good news), it had been attached to my bladder, but separated relatively easily. It was actually bigger than the scan indicated.

Once he separated it from my bladder it ‘sprang’ up high into my abdomen, so he could not create the main incision over my 15 year old horizontal c-section scar as we had initially discussed, but had to cut vertically from just below my belly button down to my pelvic bone – he would have like to have it even higher, but decided he could make this work. He likened the tumor removal to birthing a baby via c-section.

He had initially thought it had grown out of my mesentery – the web of blood vessels that holds your organs in place – which would have made for a complicated surgery, but instead it sprouted from my jejunum (part of my intestines) which was easier to deal with surgically – he took a foot an a half of my intestines and 4 nearby lymph nodes which all got sent out along with the tumor tissue for biopsy. The tumor had been fed by it’s own 1cm diameter blood vessel that he sealed off. We expected to get the biopsy results back in 5-7 days…

OOF. That was a lot to process in a dissipating drug haze. But I got the message –

At some point I found myself back in my isolated hospital room. My throat ached. I still wasn’t allowed to eat. I felt just as isolated there as I had pre-surgery. The IV in my arm had shifted and bent at some point and was creating a bloated, painful bulge. I called for assistance. 2 agonizing hours later a nurse moved the IV to my other arm.

The delay in nurse response time sent me into a panic when I had a reaction to one of the iv antibiotics in the middle of the night. A few minutes after administering Flagyl, my face flushed, my fingers became tingly and I had severe dizziness. I couldn’t catch my breath. I buzzed for help. It was over an hour before anyone entered my room. My husband called the attending doctor.

Much of the reaction had passed by the time the nurse arrived and she brushed off my concern – I didn’t know at the time it was caused by the antibiotic. She had the doctor prescribe me anti-anxiety meds. I don’t often ask for help, so when I do and I’m not believed, it’s pretty emotionally devastating. My panic turned into red-face anger. I refused to take them.

It’s just before midnight and apparently a bed “just opened up” on a Covid negative recovery floor, so they moved me. This was a much better experience – open doors, the constant soft sound of busy nurses and staff that were just an “excuse me” away.

Like all things in life, the move had it’s tradeoffs.

My roommate couldn’t get herself to the bathroom on her own and frequently relieved her chronic diarrhea at her bedside commode.

In the morning, when the nurse administered the iv antibiotic, the reaction was even faster. I called for help and she came right in – she could see the redness in my face, my shortness of breath, my dizziness. She knew right away what it was and what to do.

It was incredibly reassuring to be believed.

My abdomen hurt, my throat was still raw (from the intubation tube) but I felt cared for here. My IV got dislodged again and was causing my arm to swell painfully so they moved it to my hand. The rest of the day was filled with lots of visits from doctors and nurses inspecting my incision site. One of the sweet, friendly nurses made me a ‘hug’ pillow to hold when I moved, walked or slept.

I still hadn’t eaten anything. It was around 5 days at this point since I last ate solid food. Honestly, I wasn’t even hungry – hunger faded around day 3 and never reared up again. The doctor approved pureed, plain oatmeal and I diligently spooned it down with my usual meal of apple juice and chicken broth.

My focus turned to, “What do I need to do to go home?”

A breathing therapist (I have asthma) gave me a blow-tube and exercise instructions to use it for. The nurse asked me to start walking – walking as much as I felt up to. I took these challenges to be my ticket out, so the next day I was rolling my IV stand up and down the hallway & performing the breathing exercise every hour.

I had stopped taking IV pain meds when I had been moved – I’m not a huge fan, and I know the quicker you’re off that stuff, the quicker you can go home.

I graduated to plain oatmeal. When the attending doctor came in, all I could ask him about was what I needed to do to be discharged. He was pleased with the nurse’s report of my activity, but he informed me that I would need to have a bowel movement before I could leave.

Ummm. Say what? I haven’t eaten solid food for nearly a WEEK!

Side note, when my daughter was 2, she swallowed a penny. It took that penny 10 days to travel through her much shorter than an adult’s intestines before it exited her system.

How the hell long would it take for oatmeal to pass through my intestines?! This was not a timeline I was okay with.

By the end of the next day, my continued activity coupled with my powers of persuasion – it could take a week for a meal to pass through my system, my house is just a half mile away, my husband’s promise to return me to the hospital should anything cause concern, and – this is the winning ticket – flatulence, was enough to get approval to get the hell out of there.

Walking into my house never felt so amazing.

Getting picked up from the hospital was a hazy dream. I was so happy to be going home. It was so emotional to see and hug my husband, my kids, my dog. I settled into the couch and slept – truly restorative sleep. It felt like the chapter to this crazy experience was finally wrapping up.

Little did I know we were just getting started.