Nationals. West Virginia. In 2017, I had my heart set on the Enduro National title for Women 30-39. I was having a great set of runs and then blam-o everything went south when I broke my back brake handle, rendering it useless. There was only one more stage for day 1, and with no ability to fix the brake until the day’s racing was over, I ran stage 4 with only a front brake. I fully expect to do some super-woman front jumps off the bike, but I just needed to roll through it and could make up time the next day. Unfortunately, I sprained my ankle during one of those dismounts… game over.

So this year, I was determined to get through the Enduro in one piece. Priority #1 – no injuries or mechanicals. Priority #2 – go fast.

Now, those priorities may seem at odds, but I fully expected to sacrifice speed for safety. That was a conscious decision.

I planned 2 days for pre-riding the enduro stages. There were some similarities to last years course, and a whole lot of changes. Instead of 8 stages over 2 days, it was 7 stages in 1 day. And the transfers were brutal – miles upon miles of pedaling, often with quite a bit of elevation to conquer. I knew my XC background would help in this aspect and that some racers very well may miss the strict cut-off time to complete the stages.

Then there was the weather. The terrain at Snow Shoe is pretty gnarly, with off camber roots, monster drops and rock gardens galore. The first day of pre-ride it poured all day. The rocks were slick, the roots even worse. As I rode and re-rode sections of trail my confidence in my own technical riding abilities began to falter. On the second day or pre-riding the rain had let up a bit, but the trails had churned up a slick layer of mud on absolutely every feature. I felt like I was riding on ice. I could barely make it 50 feet without a crash, fall, dab or bobble. I was exhausted, I was bruised, I was a wreck. I wanted to quit. More than once I found myself extremely emotional with thoughts like what am I even doing here? running loops through my head. 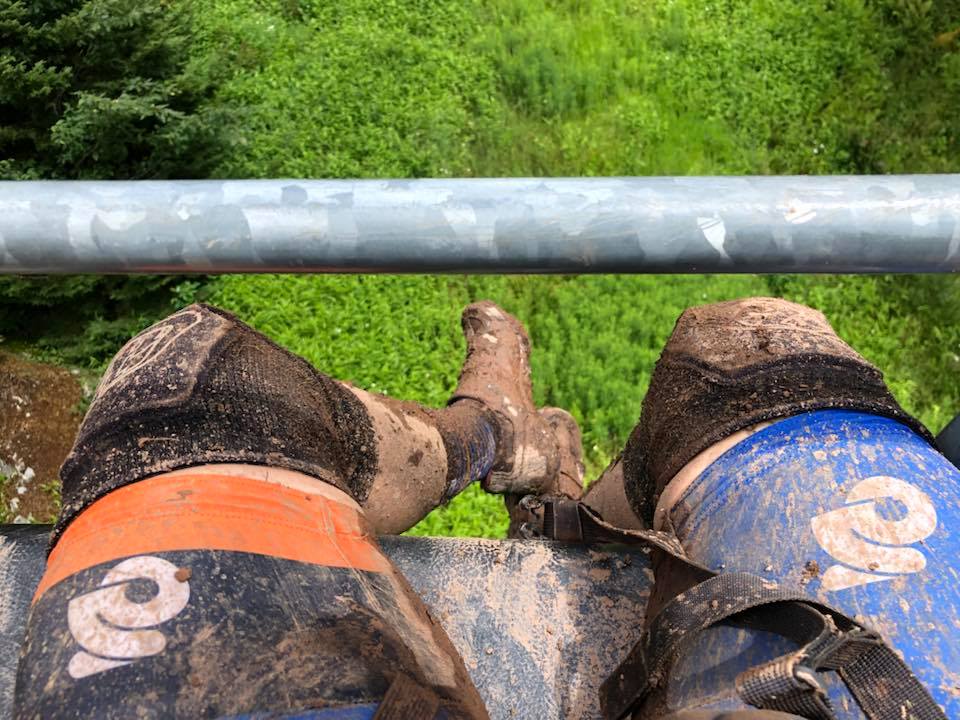 I reached out to friends and family. Their words and advice helped immensely. I changed my tires, and I changed my attitude. My goal was to finish the race in one piece and I was going to do that – without concern for the podium. I would dismount and run any of the sections I couldn’t clear during pre-ride. My redemption was in conquering the course, and that’s what I was going to do, even if that meant running each stage.

On race day my pre-race nerves were at an all time high. Meeting and chatting with other racers always helps settle me down. The weather was sunny and warm. I started out pretty tense, but was able to find some flow and enjoy the bike park stages. The first few gnarly stages were still pretty slick with  mud, and I certainly had quite a few dabs, bobbles and crashes, but I was able jump right back up and back into it.

At the end of stage 4 there was a timing tent displaying the current results. I walked right on by. Would checking stats help me finish the course successfully? No matter what position I was in, I’d feel pressure to ride faster & take more chances. Not part of the game plan here.

The sixth stage I had planned to run a majority of. It was a relatively short stage, with super steep, rooty, off-camber stretches – and once you dab, it’s a long ways before there is a good spot to remount safely. I had re-ridden it over and over in practice the day before and could not for the life of me keep the bike upright. The steep drops were criss-crossed with off camber, slippery roots. 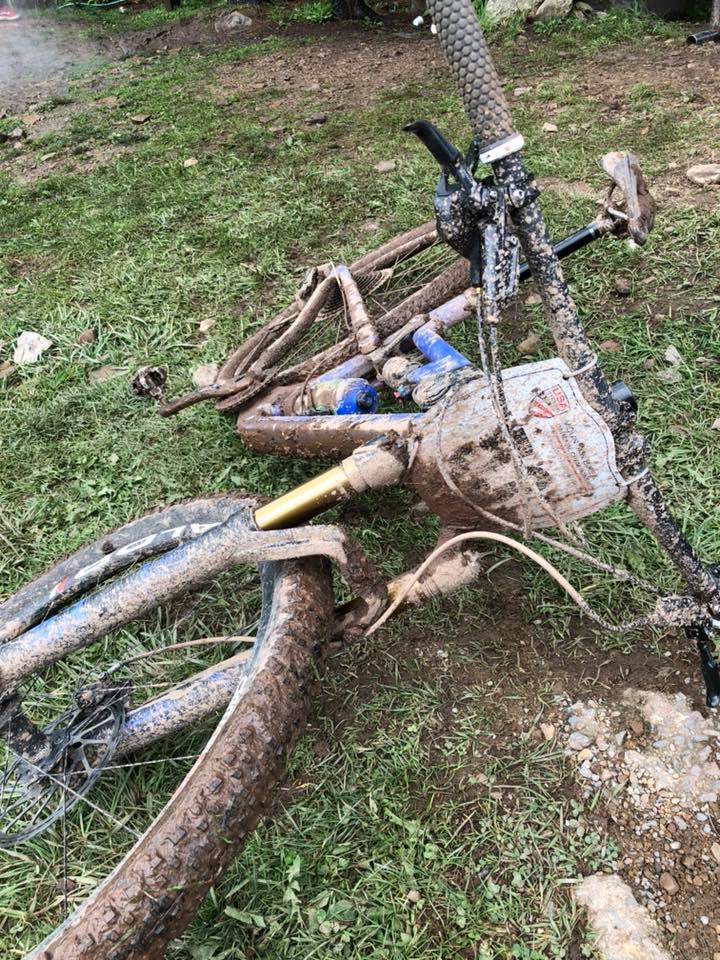 With the hardest transfers behind me, with 5 of 7 stages finished with zero mechanicals or injuries, I went into the stage feeling settled and almost relaxed. I was exhausted, but having fun, and I knew I was almost done and well on my way to achieving my goal. To my great surprise I cleared a huge portion that I had planned to run – not realizing it until I popped out of the woods. I was elated.

The final stage was a bike-park flow run. My arm pump was severe, diminishing my ability to modulate the brakes with any type of subtlety. In the end, it wasn’t my fastest run on this stage, but I got down it safely.

It was 7 stages, 5 hours and 32 miles or riding. Without a doubt, the most difficult Enduro I’ve ever completed. I made it though in one piece and felt complete personal redemption.

Hours later the results came out. 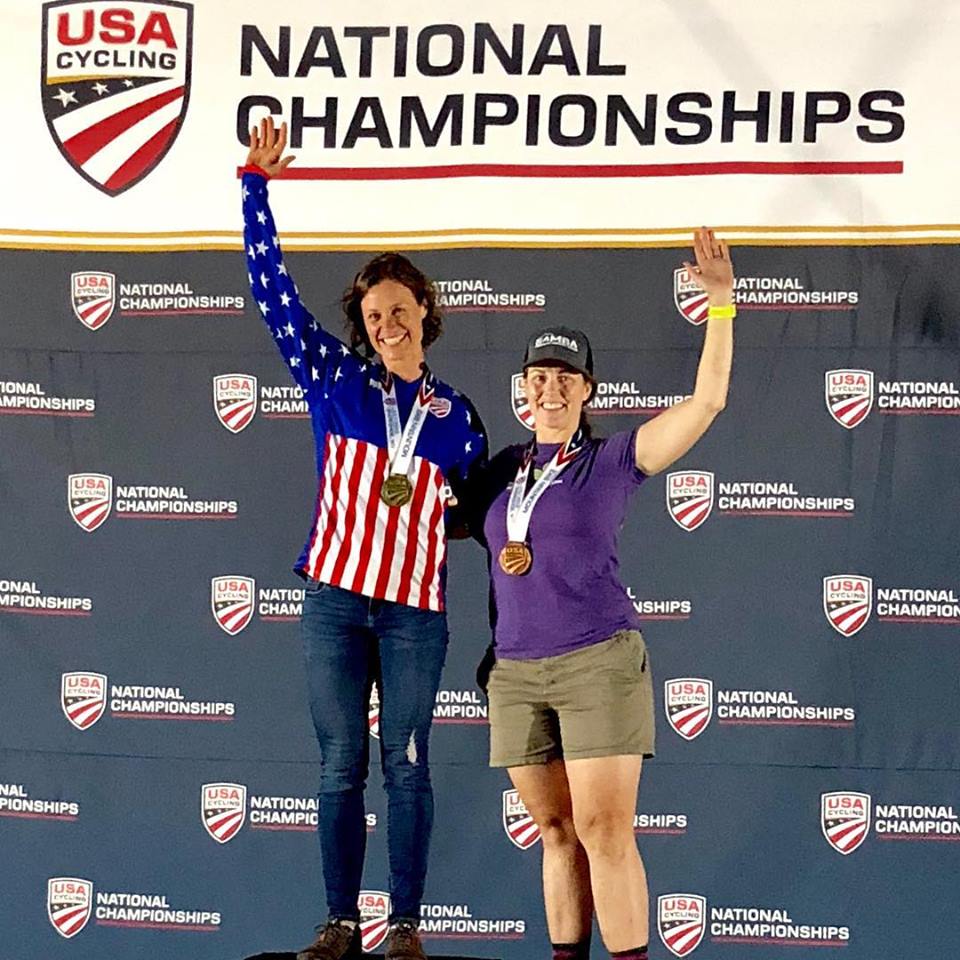 The awards ceremonially was a bit surreal.

I had 1 day to recover before the Elite Cross Country & Short Track races. I pre-rode the courses in the morning. Watched my teammates and son race their categories of XC. My legs were feeling shot and my whole body ached. It didn’t matter, I was still riding yesterday’s high.

First up was the Elite Cross Country Race. I had very little expectations of myself — just wanted to see what I could do with whatever I had in my legs. I fully expected to get pulled pretty quickly. The course started out on a nasty, absurdly steep grass climb, then into a lighting fast flow section that lead into a long slow stretch of super slippery roots followed by a ripping downhill on a gravel road, into a long gravel climb through the pits. Then a twisty, almost bike park like stretch into more gravel road climbing, then a really long, raw, wet rock garden, up to the A line rock jump and back through the start finish.

Grueling to say the least.

From a last row start, I worked my way back and forth through the pack.  Gaining spots on the descents and bleeding spots on the climbs. No surprises there. I got through lap 1 and figured, I’d probably be pulled at the end of lap 2, so I used that to motivate me up the climbs and to make passes. More back and forth. I was waved through to lap 3. Surprised, I dug in knowing this would be my last lap. I mean, have I ever finished on a lead lap with Kate Courtney at the front of the pack? I don’t think so. My legs were screaming, my skills were suffering from my exhaustion, but there were people cheering me on, some dancing and screaming my name up the last long climb. They kept me smiling and shifted my mind out of the the suffer zone.

I pedaled hard into the start finish area and spotted the race official. He was waving me into the 4th lap. What? OMG. Why would he do this. What is he thinking?!? I pedal into the final lap. I couldn’t believe it. Once my shock (and if i’m honest, annoyance) passed, I dig in. I’m going to finish on the lead lap!

I have my best run through the roots and I’m re-energized barreling down the gravel descent. The girl I’d been trading places with during the last couple laps is in my sights on the climb and I focus on reeling her in. I pass her by the feed zone and pedal on. The spectators have cleared the course to watch the leaders finish. My legs are shot, my whole body is spent, but still I find a way to pedal on. Finally, finally I’m heading into the start finish area and cross the finish line. Un-Freaking-Real.

Not much to say about this race. I poured every remaining bit of energy I had into yesterday’s XC race, so I’m not surprised to find I drop like a rock to the back of the pack, pretty much straight away. I get a few laps in and get pulled. Then I watch Ellen Noble, Erin Huck and Kate Courtney throw down attack after attack for an epic battle to the finish.

Lessons from the week

Success happens when I pick a strategy and stick to it.

Believe in yourself. Your friends and family do.

Don’t be afraid to ask friends and family for advice and encouragement.

Focus on giving all I have to the moment at hand.

My body can dig much deeper than my mind thinks it can.