After the carnage at Sugar Hill, I wasn’t expecting much.

It wasn’t easy to drag my aching body out of bed, but somehow I managed. I was exhausted and was dreading putting pressure on my newly formed saddle sores. In the pre-ride, I had really enjoyed the trails, so much flow, and the enduro-worthy descent was something I was really looking forward to.

I was at the course extra early to help run the registration table. I find this job really fun, as I get to chat with everyone coming through. We had plenty of people helping out, so I ended being in charge of marking legs. Some really cool leg tats out there 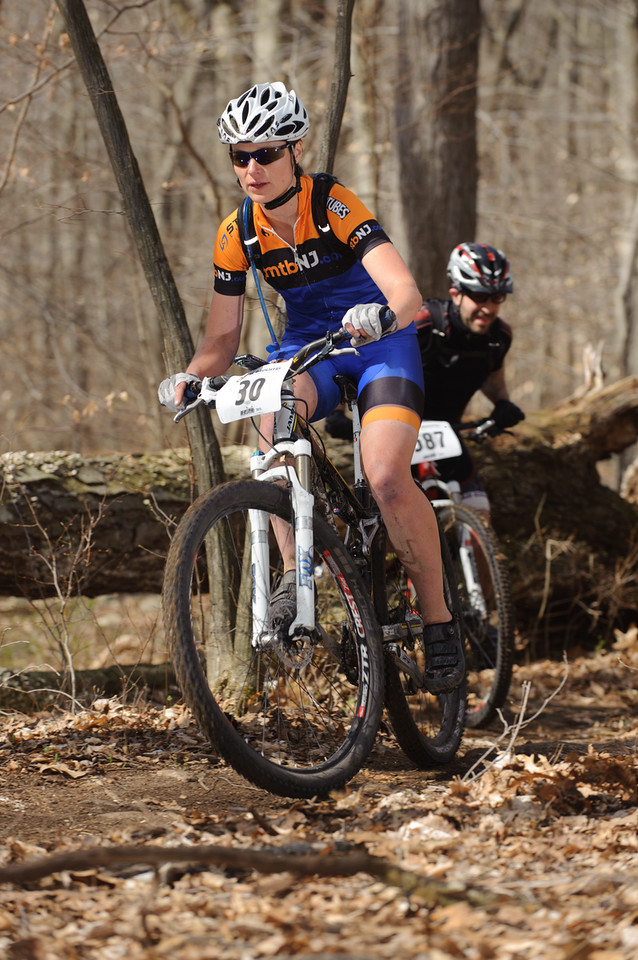 As I said, I didn’t have a lot of expectations here. I just wanted to race to race. One of my goals this month was to change my perspective on hills & climbing. I’ve been so intimidated by climbing. Racing Sugar Hill (super hilly) and then Mooch (very hilly) did just that.

At the start, everyone blasted up the fire road and we strung out. I hung in with the pack, but was off the lead girls (Tori Nelson & Jane Pearson). I hung onto Jessica Cruz’s wheel for as long as I could. My legs were pretty sapped up the climbs and she pulled away. Stacey Barbossa was right on me and took a solid pass on the climb. I stayed with here as we made our way through the single track. Then we hit the rocky descent. It leveled off and I made a pass before the descent opened back up.

It’s an incredibly long flowing descent that the MTBNJ crew took extra care to leaf blow, so it was insanely fast. I pushed the edge of comfort, drifted some corners and let the bike soak up all the rocks at max speed. As tired as my legs felt climbing, I seemed to have enough strength them for this section. I switch footed frequently to keep my legs from fatiguing to quickly. I love my aluminum Dakar (my ‘old bike’) for this type of terrain – it almost feels like it’s setup as an ‘all mountain’ compared to the new carbon Dakar (my ‘race bike’). Or maybe I’m just so familiar with how the old bike handles in this situation that is the difference.

I rode the rest of the race solo. Just trying to get through the climbs. The saddle sore was on fire and my chest had a stabbing pain shooting through it – a residual effect of the Sugar Hill endo. The giant band-aids on my shredded elbow were flapping in the wind and eventually blew off. On the second lap I knew my power was sapped so I ran the obstacles I would normally clear. I finished the race in 4th. Coming in with no expectations, this was a solid finish.

I knew that doing this double header was going to be hard. And it was. But I also know that this effort will pay off later in the season. Let’s hope it does.